Earlier this year a friend gifted me a copy of Bill Bryson’s Notes From a Small Island. Bill’s book has been sat on my ever growing To Be Read list, calling at me for quite some time. Thankfully, I was able to squeeze in this delightful travel memoir during June and I’m so glad I did.

Published in 2015, Bill Bryson is a legend in travel story telling, so I am rather embarrassed to admit it has taken me this long to get round to reading this. Crazy right, sorry Bill!

Well, I’m about to redeem myself by sharing my thoughts on Notes From a Small Island. But before I dive into my book review here’s a quick summary of the book for those who aren’t familiar with it.

In 1995, before leaving his much-loved home in North Yorkshire to move back to the States for a few years with his family, Bill Bryson insisted on taking one last trip around Britain, a sort of valedictory tour of the green and kindly island that had so long been his home.

His aim was to take stock of the nation’s public face and private parts (as it were), and to analyse what precisely it was he loved so much about a country that had produced Marmite; a military hero whose dying wish was to be kissed by a fellow named Hardy; place names like Farleigh Wallop, Titsey and Shellow Bowells; people who said ‘Mustn’t grumble’, and ‘Ooh lovely’ at the sight of a cup of tea and a plate of biscuits; and Gardeners’ Question Time.

Notes from a Small Island was a huge number-one bestseller when it was first published, and has become the nation’s most loved book about Britain, going on to sell over two million copies.

At the beginning of the book, Bill shares memories of his first encounter with England, on a foggy March night in 1973. He quickly portrays a dark, cold and dismal view of Dover having stepped off the ferry from Calais. It’s an all too familiar and depressing encounter where everything is closed. Bill’s initial observations of B&B’s and the rudeness of landladies had me chuckling. I enjoyed reading the prices of things in Britain back in 1973. 5p for a packet of crisps, 12p for choccie biscuits and 8p for a can of soft drink.

The tearoom lady called me love. All the shop ladies called me love and most of the men called me mate. I hadn’t been here twelve hours and already they loved me.

Having reminisced about his arrival in 1973, and having subsequently spent a number of years living and observing Brits, Bill decides to take another tour of Britain. This time he’s chosen to travel using only public transport, well that and the fact his wife wanted the car 🙂

One of the funniest observations in the book came early on when Bill noted how we Brits think Britain is a big place. He gave some hilarious examples of pub conversations about driving and taking road trips. Everyone, he observed, has an opinion on which route to take, whether to use certain A-Roads or motorways. Where all the service stations and petrol stations are, oh and the damn cost of fuel. He was amazed at what we consider to be a long trip, a distance that Americans would drive just to get a Taco!

Something I learnt whilst reading Bill’s travel memoir was the story of Harry Beck, the guy who created the London Underground map. Bill is a big fan of the underground and shared his new knowledge about Harry. Bill was soon pointing out that we have interesting underground station names. Rather than names like Third Street South, Bill felt that we had names straight out of a Jane Austen novel such as Turnham Green, Maida Vale, Drayton Park.

What a wondrous place this was – crazy as f***, of course, but adorable to the tiniest degree. What other country, after all, could possibly have come up with place names like Tooting Bec and Farleigh Wallop, or a game like cricket that goes on for three days and never seems to start?

Bill Bryson is an honest writer, he doesn’t paint a rosy picture wherever he goes. I quite liked it when Bill had a bit of a rant when he was having a difficult day. Whether it was due to the challenges of using public transport to get from A to B or when he arrived somewhere that he thought was hideous and ugly.

Another great example of this, and there were many in the book, was his account of trying to use a multi-story car park. I was laughing out loud reading about his experience of trying to get into a narrow built winding car park, squeezing into a tiny parking space, negotiating around a concrete pillar, which meant he couldn’t actually open the car door. And don’t get him started on our ticket machines. Brilliantly funny reading his rants, even if the language was quite strong at times, I felt they were justified rants and I agreed with him.

There are lots of other quotes and notes I wrote down whilst reading Notes From a Small Island that I wanted to include in this book review, however I don’t want to spoil it for others to read. So just to sum up…

If you’re looking for a tourist travel book of Britain giving you recommendations on where to visit, this isn’t the book for you. If, however, you’re looking for an easy to read, entertaining travel memoir / travelogue of one persons honest encounter of living and travelling around the UK on public transport then you’ll enjoy this book.

I would recommend this to anyone who has lived in Britain, whether their whole life or briefly. It will have you laughing and nodding at Bill’s spot on observations of this crazy country.

Three Take Aways From The Book

Bill Bryson was born in Des Moines, Iowa, in 1951. Settled in England for many years, he moved to America with his wife and four children for a few years ,but has since returned to live in the UK.

His bestselling travel books include The Lost Continent, Notes From a Small Island, A Walk in the Woods and Down Under. His acclaimed work of popular science, A Short History of Nearly Everything, won the Aventis Prize and the Descartes Prize, and was the biggest selling non-fiction book of the decade in the UK.

Sadly now, after a dizzying writing career, he has announced his retirement. “Whatever time is left to me on this planet I’d like to spend it indulging myself, rather than going out and trying to cover new territory”.

I hope you’ve enjoyed my book review of Bill Bryson’s Notes From as Small Island. If you fancy reading some of Bill’s books then visit Bill Bryson’s Amazon Page for a full list. I already have my eye on further reads including:

Baggage | In SatNav We Trust | Sew On The Go 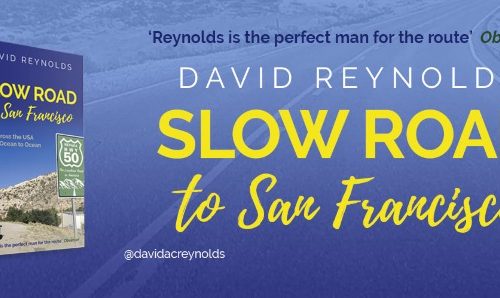 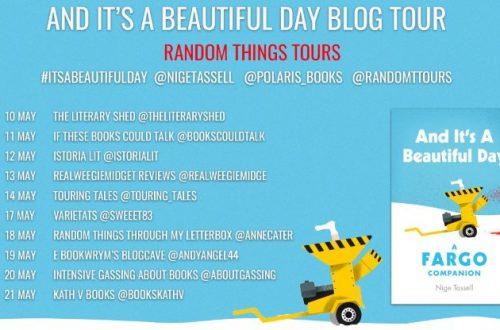 Book Review: And It’s A Beautiful Day – A Fargo Companion 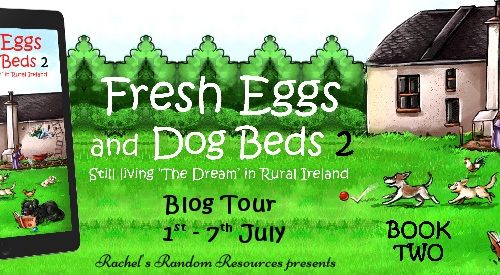